The night train future: e.g. David Loher (around minute 20 in the report), about to establish night trains between the major European capitals, in the long run including e.g. Copenhagen and Amsterdam; with the first three by end of 2019:

Night trains back in Stuttgart! Good news. Also ÖBB is planning to extend their network in 2021 with completely new trains!

Some interesting numbers have been leaked:

Occupancy rates of night trains of the CityNightLine branch to Denmark, which was cancelled in 2014

In particular: „Total occupancy 2013 in the Danish branch of the CNL night train system 2013, estimate: 63 % occupied over the year.“

That is a much higher occupancy rate than in most day time trains and comes close to airline occupancy rates. So why are airlines so succesful then and night trains not, given that they reach similar occupancies?

The case is becoming more and more clear: it is simply, and foremost, due to political decisions. To repeat it: no VAT, no jetfuel tax, no emission trade for airline – full VAT, full energy taxes for trains and night trains!

Just like in the case of lignite (brown coal) power plants: the state has consciously decided to ruin our climate by subsidizing unsustainable use of fossil fuels!

Germany fails at its 2020 emission reduction goals. Completely. And air traffic is excluded from the Paris agreement. The official numbers say: we have not reached a reduction. If you include air traffic: we have increased emission!
Anyway: Why, even without air traffic, did we fail? The reason is an almost 30% increase oin traffic since 1990, the reference year of climate politics.

Maybe that is because many kilometers of street have been constrcuted, while more railways have been shutdown than constructed?

Or because the lorry toll on German highways has been reduced fro 5 years in a row?

5 Euro for 100km train trip – Deutsche Bahn could learn from that! Included for free on the ticket: information about climate gas emissions. 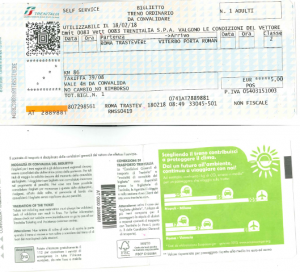 This week I suggest you go to the cinema.

Environmentally friendly electric cars, sustainably produced food products, fair production processes: Hurray! If everything the corporations tell us is true, we can save the world through our purchasing decisions alone! A popular and dangerous lie. In his new documentary film, Werner Boote shows us, together with environmental expert Kathrin Hartmann, how we can protect ourselves. Down with green lies!

This movie has an important message for us: using all kinds of social and ecological labels, the industry is giving us the responsibility for their crimes against the environment and against human rights (the two of them are frequently directly connected). As one person in the movie says: „I buy fair-trade coffee. Because the alternative is what? Bastard coffee?“
The industry is telling us that we are responsible for picking the right products, that it is not them that are responsible for producing fair products. But that’s a lie: bastard coffee & slavery t-shirts & coal electricity should not be allowed to be produced at all. The companies know that, and what they are afraid of is that we also recognize it: that we recognize that we shouldn’t just pick fair-trade coffee in the supermarket; that we recognize that we have to fight for a different economy, and that those companies have to go out of business!

(And economists share that opinion. I quote Jeffrey D. Sachs, special adviser to the UN Secretary-General António Guterres, from a recent talk: „ExxonMobil has to go out of business. Big oil has bought US politics. They own the Republican Party.“)

Today I heard a very interesting talk (Skeptics in the Pub Vienna) in which Mark Lynas explained how he turned from a radical GMO-opponent into a GMO supporter.

Science has become a political football in the age of so-called post-truth. While conservatives, especially in the US, deny the scientific reality of climate change, left-wingers and greens are equally likely to deny the science on genetically modified foods and nuclear power. How can we try to have a more evidence-based debate about these issues?

Short intermezzo, before we get back to the topic:

Populism. Also characterized as an anti-elite attitude, populism is a political movement mobilizing a segment of so-called „regular“ people to take the control of the government out of the hands of so-called „out-of-touch“ elites. 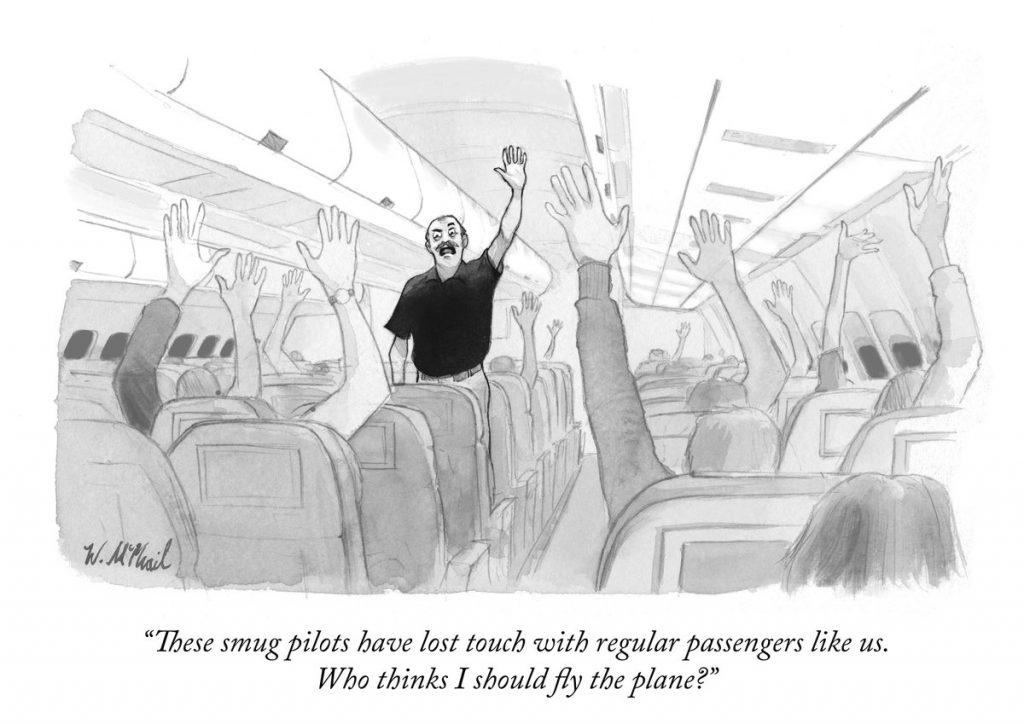 He had some interesting points (slightly amended here):

And some more references:

Mark Lynas on Wikipedia (check out his books also!)

Steven Pinker on Wikipedia (you don’t believe in science and you also think that everything is getting worse and worse with time? Look at his book Enlightenment Now: The Case for Reason, Science, Humanism, and Progress which as usual you can also get from a local bookshop, if it still exists)

PS: And of course, the case is again: We have to form opinions based on true information. Not on anti-elitist fake news & post-truth.

Where in London do you find the most environmentalists? Heathrow airport, sometimes Gatwick.

Jeffrey David Sachs is an American economist (..) known as one of the world’s leading experts on economic development and the fight against poverty. (..) he serves as special adviser to the United Nations (UN) Secretary-General António Guterres on the Sustainable Development Goals (SDGs), a set of 17 global goals adopted at a UN summit meeting in September 2015.

I had the pleasure of hearing a him give a talk today, which was very inspiring. I will try to cite here (please apologize for any mistakes, I was taking only very sketchy notes) his 6 key points for the Transformation to a Sustainable World Economy:

Get one of his books from your local shop (if you still have a local book shop), e.g.,

Check out some slides of his talks (unfortunately I only found some slightly older ones):

The Age of Sustainable Development: Talk as PDF-Slides

„With the new train connection between two of Germany’s biggest cities, Deutsche Bahn wants to compete with low-cost airlines. Given that tickets may total around €130 to €150 per journey — considerably more than a low cost flight — is this realistic?„

How is it possible that flying is cheaper than a railway ticket? A plane needs a crew of 6-16 people, technicians, very frequent technical chekups, airports, air traffic control and loads of fuel. A train – once the tracks are there – requires much less effort. And nevertheless flying is so cheap. How can that be?

Flying is subsidized. In Germany by an amount that corresponds to 270 Euro per Person and year. In other words: everyone pays 270 Euro a year to support the destruction of our climate. Including the almost 50% of the population who don’t travel by plane: they also support the cheap Easyjet weekends in Barcelona.

If you want to know more (try to use google translate to read the German text): The state of Germany supports climate desctruction (not only due to air traffic) with subsidies of 57 Billion Euro every year. Not counting in the damage to the health of the citizens.

And almost all other states do the same.

At least there is one nice proposal out there now: the European Union is going to provide Interrail passes to young people.

Planning a trip to Italy? Consider taking the ÖBB Nightjet from Munich and Vienna to Venice, Verona, Livorno, Milano or Rome. Or take the Thello/Trenitalia/SNCF from Paris to Milano. Or a ferry from Spain or the Balkans.

Here’s a little picture to put some numbers in context:

Near Denmark, one of the world’s biggest windparks was opened recently. This windpark is expected to reduce carbon dioxide emissions by 700 000 tonnes a year, by providing electricity.

On the other hand, take a look at the carbon emissions due to air traffic of flights within Germany (where there is practically new distance that could not be covered by train in max. 7-8 hours). Simply by not flying anymore only on distances within Germany we could reduce emissions by the amount for which we would otherwise need more than 11 copies of one of the world’s biggest wind farms!

Even more: if Germany was to invest more into high speed lines, the train could do the distance in less than 3 hours (like the Frecciarossa Rom-Mailand).

If we still had night trains, we could do the trip losing no productive time at all: board at Stuttgart Hbf at 10:30pm in the evening, wake up at Berlin Hbf at 6:30am in the morning, ready for work or leisure.